A real life story of travelling and wandering

David Nash is an artist, a sculptor in the UK, with an interesting specialism – he sculptures in wood and he likes to go BIG!

In the summer of 1978 Nash was told of a huge oak tree that had just been felled. He travelled to the site and spent some weeks working on the tree and eventually made a boulder of wood thinking he could take the boulder back to his studio.

However, the giant oak ball, was three feet across and weighed half a ton. Being difficult to move, Nash decided to use a nearby stream to float the massive chunk of wood downstream. So he pushed it and rolled it and eventually managed to get it into the stream.  But once released, Nash realized this boulder had a life of its own. From this point “Wooden Boulder” was born – literally “a moving piece of art”.. 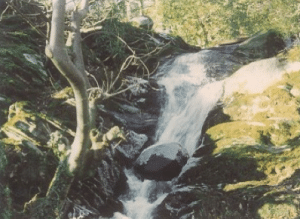 To start with it went downstream and down a waterfall where it got stuck and stayed more than a year – embedded in stones and sediment. Then one night when there had been heavy rains, the water picked it up and it started moving again. Off it went, downstream moving along, before getting stuck again for many months. This became a repeating cycle.  After 4 years, the boulder was still there, still moving from place to place. Nash kept going back to photograph it, sometimes struggling to work out just where it was. 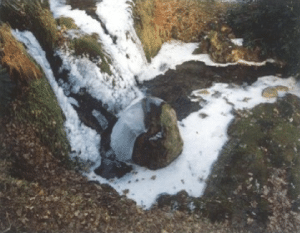 Year after year this carried on. Sometimes it would be carried fast by a swift moving stream, other times it would just bob along slowly, quite often it would be stuck in one place while the seasons came and went. 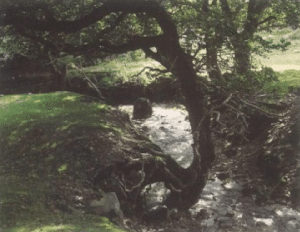 Then the boulder entered a river, the River Dwyryd. But in 1994 it got stuck under a bridge – was this the end?  This was the one time that Nash did something, He arranged for equipment to hoist the boulder out and set it down on the other side. But after being freed it just sat there for several years — the water spreading over the shallow banks did not have sufficient power to move it.

This pattern continued until it entered the estuary in 2003.  Suddenly the waters became tidal, and the boulder itself became highly mobile. The high tides moved it every 12 hours to a new place, each placement unique depending on the tide, wind, depth of water etc. David Nash now had a very hard time finding his boulder. Sometimes he would search for days in a small boat.

Then in 2003 the boulder disappeared from the estuary. It may have been washed out to sea or buried in sand in the estuary ….. 25 years after he first cut it out of a tree in Wales.

The wooden boulder was last seen in June 2003 on a sandbank. All creeks and marshes have been searched so it can, only be assumed it has made its way to the sea.
Where is it now? Was it set freed, or lost at sea?

“Don’t cry because it’s over – smile because it happened”

Dr Seuss
When the boulder disappeared, Nash commented “for 25 years I followed its engagement with the weather, gravity and the seasons ….  the gone-ness was palpable”.

There are things in our lives, houses, keepsakes,.., maybe places or jobs, which are “constants”. We get so used to them we couldn’t imagine living without them. But change comes. Our ability to cope with change comes down to our willingness to embrace the new – whatever that is.

All of life’s journey there are new adventures, new streams and currents we can choose, or tumble into without quite realising. A faith journey is a particular type of journey because it can embed itself alongside every other journey. Sometimes our faith is the prevailing current carrying us along through rivers, towns and fields but at other times, in those arid, parched seasons, that undercurrent of faith can seem distant, even insignificant. At those times it’s good to remember the times we know we were carried (…smile because it happened), as well as recalling the realism of Peter when Jesus told him he could leave any time he wanted … “Master, to whom would we go? You have the words of real life, eternal life” (John 6:68).

It’s easy to think we have a “special deal” with God through this journey and that the terrible things in this world won’t happen to us – after all if you give money away, pray, read the word, and do what you can to help those in need disasters shouldn’t happen – right? But there is no deal like that. Last time I looked there were as many Christians dying of cancer as non-Christians. Last time I looked He was ….” causing the sun to rise on the evil and the good and sending rain on the righteous and the unrighteous” (Matthew 5:45). God’s common grace is extended to everyone because that is His nature.

If it seems like we are stuck in a dry season today, try to trust him for the next day. God also went on a journey at great cost, to help you and me on our journeys.

Wooden Boulder is a well-known story – I am grateful to Graham Sparkes President of Luther King House for drawing my attention to it.

The Ash tree featured at the top of this post came down one windy night in February in Dunham Massey, a stately home in England. I happened to be there the next day.

An Exercise for the Reader?

Recently the boulder re-appeared: http://www.culturecolony.com/news?id=13746 What metaphor of our life journey could we draw from this?

[…] If you enjoyed reading this, try reading this real-life story of journeying and wandering: The Boulder. […]

That’s interesting Paul. Your comment on consistency made me think … maybe it’s God who is the boulder, always there, unchanging yet always on the move?
In which case we would be the shifting scenery, the seasons coming and going .… always imagining its us who is in control!
Thanks for your comment 🙂
cg

hi Chris,
I found the story interesting. It helped me realise again that God continues with us on our journey, whatever that journey might bring across our path, expected or unexpected, predictable or unpredictable. For me, somehow it’s the dilemma of how to be more consistent in not lurching from one experience to another and at the same time seeing God as the consistent one who wants a living, vibrant and personal relationship with us to transform our responses to what might seem confusing, depressing, fearful, meaningless , empty or joyous times!