American Christians will vote for Donald Trump — here’s why

It seems a contradiction. How can people – Christians – with a traditional view on morality and the Bible vote for Donald Trump?

Trump stands accused of multiple counts of sexual harassment, has pursued married women, has become rich running casinos, and was recently impeached (proven guilty) for abuse of power. And it isn’t just his morality. The Washington Post claims that Donald Trump has made an astonishing 20,000 false or misleading claims while in office — over 1,000 of these on coronavirus alone. While this may be an over-statement, few doubt that a President who casually suggests that people inject themselves with disinfectant needs to be treated with caution. Most, recently the Financial Times reported a statement from Trump that America should reduce its coronavirus testing capability — to bring down the numbers! …. a comment that is so far off the scale it leaves me wondering if it’s brilliant.

Donald Trump comes straight out of a cartoon doesn’t he, full of bluster and hype, red-faced and utterly unpredictable. It’s easy to line up and take shots – we all do it.

But don’t we owe it the millions who will vote for him in 2020 to understand why?

Some may find these next paragraphs unpalatable – it doesn’t suit the narrative in our heads to talk positively about Trump’s appeal.  But he does have appeal.

Trump surfed into the Whitehouse in 2016 on a national wave of anger. This was mostly from white working-class voters, so called “blue-collars” – the least well off, the unemployed, the have-nots. These people resent the professional elite because they feel scorned by them but they connect with Trump because he apparently feels the same anger at being belittled as they do. (And they rather admire the fact that Trump is actually very good at making money).

Another attribute that people like is Trump’s certainty. Trump is certain about many things and certainty sells. He takes the truth as he sees it and he calls it out, candidly and bluntly. He doesn’t care who gets offended. We may disagree with him but we are rarely in doubt as to what he thinks. This “clear decisiveness” is something many politicians lack. They tend to worry about opinions and they nuance their statements in ways that make them hard to understand. Certainty sells and Trump is certain about many things even when he is wrong. And people like that. It wrong-foots his opponents (and people like that too).

And then there are his achievements on the world stage. Two come immediately to mind. Most recently he presided at a Middle East peace agreement between Israel and UAE/Bahrain. This may be minor in impact – and probably fueled more by mutual distrust of Iran than anything else — but they represent a significant step forward, and Saudi Arabia may soon be added to this group. And secondly, Americans at least are grateful for his insistence that the European members of NATO contribute a greater share to the financial pot.

But more than any of this, it is Donald Trump’s positive stance on “the right to pray” in schools, his intention to place Bibles back in schools, his support for “traditional marriage”, and his stance on pro-life that draws evangelical Christians. And it comes back to something he said in 2016. 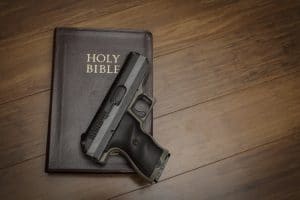 “Christianity will have power”

Four years ago as Trump began his 2016 campaigns he gave a speech at a small Christian University in rural Iowa in which he made a straightforward promise. “Christianity is under siege” he said, and then:

A simple certain statement like that sells. Its unambiguous, it’s clear, it’s targeted to one group. It’s a promise, he has repeated, and, arguably, a promise he has kept.

If your national leader stood up and promised that your brand of Christianity will have power, what would you do?

Of course, Trump’s promise was being targeted at a narrow group of people – largely straight, white, married, conservative evangelical Christians – but these make up 20% of the US electorate, and some estimates say 80% of them voted for Trump. These Christians say they are protecting traditional Christian values from being eroded by the secularization of the western world. Most of them don’t like Donald Trump, but they understand him. Their relationship with him is transactional: they vote and he makes the country more to their liking. They feel safe with Trump in charge because their highly conservative Christian values are protected .… right up to the level of the Supreme Court where Trump has just appointed yet one more conservative Christian.

The problem is many of us, especially those of us outside the US, hear what the President says, we see what he tweets, but we don’t often see what he does. 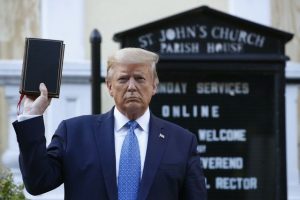 If your national leader stood up and promised that your brand of Christianity will have power, what would you do?

So what happens now?

Nationally, Trump is trailing Biden in the polls, but that means little. Approximately 80% of evangelical Christians still say they will vote for Donald Trump and these people tend to turn out on voting day. So this is not a done deal, and the Democrats need to spend less time ridiculing Trump and more time understanding the people who vote for him.

The TV debates have started, the world and his dog are watching, and the stakes genuinely could not be higher. With issues such as the virus and the climate, and with uncertainties caused by China and the bizarre leader of North Korea, not to mention the silencing of faith in public discussion, the world is at a tipping point on many levels.

In such a dangerous world we all need America to be great again. Question is, what do you mean by great? 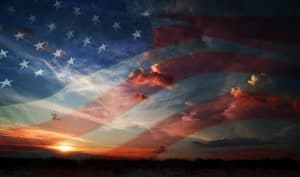 If you enjoyed reading this try What would Jesus say to Donald Trump?

Hi Chris Sorry, I think you missed the boat on this one. You can’t accurately talk about the appeal of Trump without the words “race” and “racism”. The history of the US is rife with racism — from the debates during the drafting of the Declaration of Independence about whether to address slavery in that document. Racism influenced the US Constitution, the unique structure of the Senate and Electoral College, the 2nd, 13th, 14th, 15th, and 24th amendments, the boundaries of states, the reason that there are two Dakotas, the reason there are two Virginias, numerous presidential elections, the bloodiest war in US… Read more »

Hi Craig Thanks for reading and commenting; you raise an incredibly important point. And as many have pointed out Trump refused to condemn white supremacists in the debate the other day which doesn’t help Trump’s “I am not a racist claim”. I know you are talking about people you will know since you’re based in the US. I wouldn’t disagree that Donald Trump has demonstrated racist tendencies – indeed I mentioned that in blog but didn’t spend time on it. So I take your point that for a number of white evangelicals, racism may be the major reason they will vote… Read more »

Here are three articles about studies of the differences between Trump and non-Trump voters. There are others, this is just a starting point.

I ill check those out Craig — thanks again!

“Christianity will have power” Well of course, because Christianity is the fourth kingdom spread out on the earth. She is Mystery Babylon who holds the golden cup of the Lord! I am not into politics. However I am here to share my message and testimony to any believers of Jesus Christ. We are in the book of Revelation. Chapter 11 is about to be fulfilled in the Great City and the land of the living, but end of days known as great tribulation does not start until after God pours out His spirit upon all flesh and gathers all Jewish people from… Read more »

OhI noticed that the article you quoted from pew research specifically says WHITE evangelicals. How did you miss that? And in answer to your question if our leader stood up and promised our brand of christianity would have power-do you raise the nazis won church support for promising to support the traditional family, and to give the church more influence over education? That didnt turn out too well.

So unbelievably disappointed that someone of part asian heritage has not realised ‑and how ? when America is burning-that black evangelical christians are overwhelmingly not going to vote for Trump. They are going to vote for Biden. Here’s a link to why by some American christian broadcasters. Shame on you. https://www.youtube.com/watch?v=W4eS2E-PoGo&t=39s

hi meena.…. and your point is what?

Thanks Chris for a very helpful and illuminating post. Can I recommend Chris Wright’s latest book ‘Here Are Your Gods!’: Faithful Discipleship in Idolatrous Times’ published last week both here and in the US. Deals with current political situation in both UK and US.

And thanks for the recommendation Michael — yes I will look for that!

Chris,   Kelley here from the Deep South of the USA. Also, a Trump voter.   You made astute points and I am grateful for them. What most people don’t get (& I may be unkind) is that the Prez is a “loud-mouth NY-er who runs at the mouth and doesn’t mean most of what he says.”   Should a Prez behave and talk this way? Not really.   But as you say, look at what he does not what he says. The President and I would likely never be lunch buddies. He grates on me greatly. He might be fun at our Thanksgiving table, but we’d have… Read more »

Hi Kelly
Nice to meet you. As a Trump voter I’m glad you found my “rough profiling” not too far from the truth. Of course I am not endorsing or supporting DT, but what I am supporting is that we need to understand Trump voters — like yourself – and esp for those of us living outside the US who sometimes find this difficult
Thanks!

Hey, Chris! I first ran across you randomly a while back and found your blog both encouraging and provocative. I subscribed to your ministry site. What you share is fire. There is a backstory here for me. I’ve been in vocational ministry, specifically youth work, for almost 40 years. It’s been a joy. I still dabble in youth ministry part time, but my day job is with the Mississippi Baptist Convention. This is the post that put me over the edge (in the most positive way) https://7minutes.net/blog/the-3-ideas-to-grow-your-faith/ It sure resonated with me — when I first read it, and even today. I’d like to… Read more »

Hi Tony – thanks very much for reading and taking time to write some encouraging words. I’ll email you separately re your site etc ?

Hi Tom — your verses refer to Paul’s instruction to respect the governing authorities since God has placed them there.… Having said that, there are occasions where we are called to follow our conscience directed by the Holy Spirit — and that can lead to conflict with the governing authorities .….
Anyway I hope my article helps people understand (maybe even respect) the folks who vote for DT.

Fabulous and entertaining and controversial
Thanks Chris

I have stopped worrying about these type of politicians gaining high office. One can only vote for their desired leader the rest is up to God. Let us remember God is in control of the present and the future whatever.