Do Christians Muslims and Jews worship the same God?

It was a rather grey and unremarkable Saturday afternoon at our Baptist training college. But being asked a question like this can make a dull day memorable.   Do Christians Muslims and Jews worship the same God? asked our tutor.

So, we scuttled off into those bothersome small groups as one is expected to do, and, if I remember rightly, we all came back with pretty much the same answer. The answer that felt right, and was theologically “politically correct”: Christians and Jews worship the same God, Yahweh of the Old Testament, but Muslims do not. Easy peasy!

Of course, that was the answer our tutor was expecting:

“Are you certain?” he says.

“Well”, (glancing around for reassurance), “for a start Muslims don’t believe that Jesus is God”.

He continued to unravel our thinking.

Sometimes you must unpick an idea in order to reconstruct something more robust. That’s what I want to do here. Questioning our inbuilt assumptions and prejudices may be particularly poignant as we see renewed levels of violence between Muslims and Jews in Gaza, and see no let-up to extremist religious terrorism in Europe.

Let’s start with an easier question – I hope

Do Christians, Muslims and Jews SEEK the same God?

Think about this before reading on.

It’s not a trick question. Surely, it’s “yes” at least for the clear majority of us:

Any devout seeker of God is seeking the one true God. That may seem obvious but sometimes we need to state the obvious.

Does God hear the prayers of people who follow these different religions?

Perhaps surprisingly the answer appears to be yes. Some of us may think the one true God only listens to prayers directed to Him, in His name, in the name of Jesus, but that is not Biblical.

The easiest example in scripture is that of Cornelius in Acts 10. Cornelius is a Roman centurion, neither Christian nor Jew, a Gentile. But he is called a devout “God fearer”, and the angel from God tells him God has heard his prayers and seen his gifts to the poor. After that Peter brings him the good news of Jesus. But God heard his prayers before that point.

So, it seems that God may reach people in ways we would not expect. Salvation is only found in Jesus Christ, (Acts 4.12): “… there is no other name under heaven given to men by which we must be saved”. I believe that, but I can’t limit the ways in which Jesus chooses to work, the ways he chooses to reach people.

That shouldn’t surprise us. After all, nobody in the Old Testament called on the name of “Jesus”, and yet we understand there is salvation for Abraham for Moses, for Job. Moreover, many would consider that today God may somehow apply the work of Christ for example to infants who die before they have a chance to ever articulate the name of Jesus.

God works to reveal Christ in ways that go way beyond my limited understanding, and I’m glad He does. 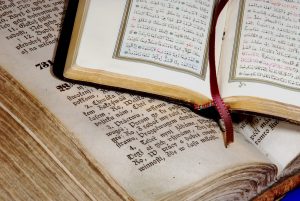 Back to the starting question

OK so Christians, Muslims and Jews seek the same God, and this one God may hear their prayers or respond to their acts of kindness as he chooses to do – rather than what you or I tell him to do.

So do we in fact all worship the same God, albeit with different names?

Interestingly many Muslims believe we do worship the same God. They say that Christianity is a corruption of the one true faith which Islam corrects. They say Jesus was born of a virgin, he was a revered prophet but he was not God and he did not die on the cross (despite evidence even from secular scholars that he did).

But from our (Christian) perspective there remain major differences between Christian and Muslim depictions of God.

The “what” and “who” of the one God we both seek is different. Yes, we seek the one true God as do Muslims (the “what”), but “who this is” is not the same. The person of God characterized in the Bible turns out to be a very different to the person of Allah characterized in the Koran. Allah and Yahweh turn out to be different people. And the claims of Jesus are also sufficiently different that they do matter. There are major differences on salvation, sin and eternity amongst others.

Whereas we can regard Jews as having a true but incomplete revelation of God, there remain major discrepancies between Christian and Muslim understandings of who this God is.

But hang on! So after all that hard thinking we’re back to the rainy Saturday afternoon with the answer we started with?

Yes, but I hope with a better discussion and understanding of why we are there. And two reasons why this discussion matters:

… walk gently because God has been there before us 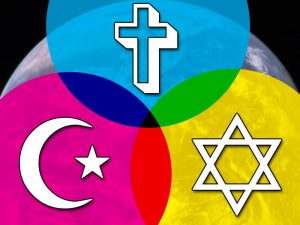 Jeremiah 29:13, “You will seek Me and find Me when you seek Me with all your heart”.

This article was first published by Premier Christianity

Thanks. I think it’s also worth pointing out that the majority of the non believing public DO think we all worship the same God. We need to deal with that well.

Graham Adams :All good questions! No easy answers here. And of course, the flip side of whether we worship the same God could be this … there’s a temptation for any religion to think that, as long as it neatly articulates a tightly defined understanding of God, it couldn’t possibly be worshipping a false God, but what if the God being worshipped is only truly Godself when revealed as graciously and hospitably generous to humans who may inadvertently misconceive the boundaries of God …? In other words, what Jews, Christians and Muslims have in common is a shared tendency to… Read more »

So “what if are all worshiping a false God who nevertheless is himself generous to us” ? .…. That needs some unpicking!

Graham Adams sure! On the one hand, I’m making a very simplistic point — no human conception of God is identical to the whole truth of God, therefore all our gods are partly false. But also, from trad Christian perspective — we’re saved by God’s grace not by our correct grasp of God, so the good news is that God loves us even though our worship partly misfires (He doesn’t withhold love until we get our thinking straight.) And finally (!), when the church has been especially sure of its conceptualization of God, it has frequently gone as far as… Read more »

An excellent, well developed article Chris; thank you. It mirrors much of my own recent thinking, some of which may be the subject of my next book (if it ever gets that far!). I have read the thread on the Premier site, and noted the arguments. I wonder if approaching from the perspective of inate practice, rather than religious belief, might help further understanding?

Hmmm. Confused. “Inate practice” meaning simply what we do eather than anything we believe?

Sorry about the delay — I have been out of electronic contact.  When we are asked ‘what do you think about … ’ or ‘what do you believe …’ we are invited to use our brains. What we offer is a reasoned response from our intellect (exactly what I am doing now!). We typically finish up giving some sort of synthesis of received wisdom, religious belief, family values, personal reflection and experience etc. What I am suggesting by the phrase ‘inate practice’ is paying attention to what we do when we are NOT obviously processing through our thought system. Perhaps… Read more »

They all seem to have different imaginary friends!

I can see how that appears to be the case to my atheist friends 🙂
Thanks for reading and commenting Neil!

Wow uncomfortable but necessary!
Thanks again

Always good to discover another Christian who is doing a great job for the Lord on the internet. God bless you.

Thanks you. Remain Blessed.