I remember many years ago feeling overwhelmed by a line I heard in a sermon:

That line moved me – and stuck with me – because I knew I was the self-righteous sort that the speaker was referring to. I have sometimes been quick to judge others harshly.

Admitting that we can sometimes speak insensitively or simply be in the wrong is uncomfortable. We prefer to avoid it. It’s far easier to go about “knowing we are right”, avoiding anyone who we think offended us ….. but “sharing” with other people in church just how much someone else has hurt us. Much easier!

This short series of posts is on conflicts at home, at work, and especially in church. We started with the quote:

“Churches are more vulnerable to conflict than any other group, community, or organisation”

In this last post we end by asking the question what can we do when we find ourselves in a conflict? You don’t need to read the previous posts but the 4 together form a series. 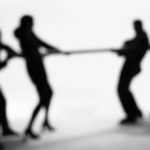 John-Paul Lederach is a University Professor in the USA. He is highly experienced in mediating conflicts, from feuding warlords in Somalia, right down to his own local church. But he is also good at keeping it simple! I interviewed him recently. He says that as peace-makers we need to get our heads around two ideas.

See beyond the immediate issue

See past the issue that people seem to be arguing over – but don’t ignore it. What does that mean? It means we need to see past the immediate problem – otherwise this conflict will flare up again.

In a bit more detail … Every conflict has episodes – upsetting outbursts where we see (or feel) the anger and frustration. But every conflict also has an epicentre – where we find the less obvious aspect of relationships. We need to get to the relationships not just the anger. We need to get to the epicentre not just the episode of the conflict for lasting peace. So, says Lederach, don’t just rush for a quick fix, don’t paper over the cracks and hope it goes away. And if you are involved in the conflict yourself, don’t shoot straight from the hip. Those harsh words you want to say out of your bitterness and hurt are precisely the words not to say.

In fact, we need to learn to “look away” from the problem in front of us and not let it distract us. Lederach says, “empathise with those who feel hurt but don’t be drawn into the spin of their anxiety … don’t be driven by the need for a quick fix”.

In Acts 6 there is a dispute over food distribution. The apostles could have risen up in anger, blamed those responsible for giving out food and told them to shape up. But they chose to avoid a quick fix and instead asked the church to appoint leaders they all agreed on. 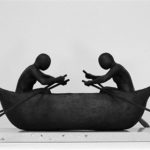 And then his second idea:

Be sensitive to peoples’ self esteem

People’s self-esteem and their sense of identity is often at the root of conflicts at work or at church. And it is easily damaged. As Christians our identity is often bound up in a church activity which we contribute to, or in our church itself. Even a straightforward task like setting up for communion gives a person a sense of identity. It’s their job, their role, they care about it. So saying “let’s change how we do things around communion” and not involving this person … will likely create a conflict.

And it’s even more important with people doing complex tasks like running a complex event or the evening Youth Club. People view that club as theirs, no one else understands it the way they do.

Lederach explains: “identity lies at the deepest level of human behaviour because we are asking basic questions such as ‘who am I?’ … ‘who will we choose to be together?’. The ability to empathise at a deep level with another person’s sense of identity is hard but crucial if we really want to resolve a conflict.

Lederach again:
“Conflicts in churches are between people who care deeply about things, and those things somehow represent them”. 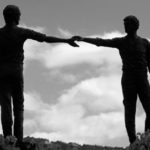 Let’s go back to that opening line:

To be sure, learning to handle conflicts well provides an opportunity to build relationships, and grow as a church. But we need a soft heart – a nature that is compassionate to others; and a thick skin — a character that is hard to offend. Maybe I just described Jesus. That’s a tough act to follow – but it’s not impossible!

Managing conflicts in your church – a quick summary of this series

Expect conflicts in your church to happen from time to time, and:

Take the Initiative
Go and see that person … “please help me understand why you think like that”.

Look beyond the Immediate
Beneath those episodes of anger lies the epicentre of relationships – don’t just go for the quick fix.

Be sensitive to Identity
Peoples’ sense of worth will often lie at the centre of a conflict.

This post is part of a short series.The previous 2 parts were  Why do Christians Clash?  and A Battle to be Won or a Problem to be Solved?
There is also a 3min radio interview summary
This series is based on an article by Chris Goswami that first appeared in Christianity Magazine.

Great article, Chris, keep it up.

Very helpful analysis Chris. The challenge as well is that how we handle conflict is a good test of our own spiritual maturity — ouch! Even more of a reason why we all need grace!

Thanks for the reply

[…] second and third parts can be found here: A Battle to be Won or a Problem to be Solved and Soft Hearts and Thick Skins This series is based on an article by Chris Goswami that first appeared in Christianity Magazine. […]

[…] is part of a short series.The first part was  Why do Christians Clash?  and the next part is Soft Hearts and Thick Skins. This series is based on an article by Chris Goswami that first appeared in Christianity […]