Volunteering soared during lockdown – but where is it now?

Do you remember those beautiful scenes of Italian neighbours singing to one another from their balconies? It was just one sign of the worldwide swell of human solidarity we saw in March to June, during lockdown. In our country we held a “weekly clap” for our essential workers (how very British!) – another way of connecting, belonging, and wanting to help.

As well as this show of empathy thousands offered to volunteer during lockdown. Many people felt they “wanted to do something”. Indeed we had leaflets through our doors offering help from groups we didn’t know – with no other motive than “to love one another”. And, when the Government asked for people to step up and join a “volunteer NHS army”, a staggering 750,000 people responded.

Of course, on the flip side, there was panic buying, acts of selfishness, and it turned out that the government didn’t know what to do with 750,000 people anyway. But few would deny that something significant happened to our collective human spirit during lockdown. The result was a show of human solidarity that was nationwide, worldwide, and sometime viral.

As human beings, times of crisis make us re-evaluate what is important to us. A recent survey of 4,500 UK adults commissioned by charity Faiths United crystalises the change in our outlook during lockdown. It makes for interesting reading.

The survey firstly confirms the trend that before lockdown people of faith (including Christians, Jews, Muslims, Hindus, and Sikhs) were far more likely to volunteer their time and money than people of no faith, ie:

That’s not actually new. What is new is the fact that during lockdown the gap between religious and non-religious people all but disappeared, with the population as a whole stepping up their volunteering effort. Post lockdown the gap is beginning to widen once more. 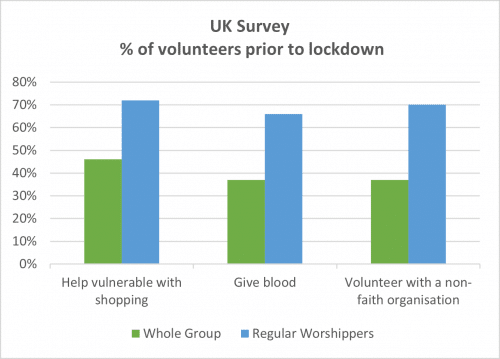 The survey demonstrates that in times of crisis there is a shared – almost overwhelming — sense of social responsibility, with people of all faiths and no faith equally stepping forward to help. Once the sense of immediate danger passes, however, it is largely people of faith who continue.

But then it’s worth asking:

Why are faith-based people so good at giving?

Of course, huge numbers of non faith-based people also volunteer time and effort week-in week-out, eg running Scouts and Brownie groups or working in charity shops and foodbanks. But faith-based people do it more. Why? There are three reasons.

Firstly, helping one another lies at the heart of all major world religions. The “golden rule” of all religions – to treat one another as we would wish to be treated – is backed by specific codes of conduct within each. For example, for Christians, God’s clear instruction to help the poor, the vulnerable, the needy, runs consistently from Old Testament, to both Jesus and Paul in the New Testament.  And even though this is a “command”, most people volunteer gladly. It’s a simple show of gratitude toward a loving God.

The second reason is a matter of practicality. Churches and faith-based organizations are set up to help and are accustomed to it. We have the infrastructure of buildings, small-groups, charitable contacts etc that make it easier for us to step up. Hemant Mehta, the well-known “friendly atheist” writer and speaker, noted on the radio show Unbelievable that the lack of an atheist equivalent to churches was a great pity. “When things are going wrong in your life churches are great at helping you through that stuff”, he said. Secular equivalents to churches have never achieved this “one-anothering” as well as churches. It’s worth noting, however, that the lack of infrastructure is one reason holding back people of no faith. When you provide the means to volunteer (such as the “volunteer NHS army”) they step forward.

But the third reason is the most interesting — and least obvious.

Giving is good for you!

People of faith have discovered over centuries that helping one another is not only good for society, it’s good for our health! Setting out to help someone else gives us that feel-good factor of seeing a person better off because we managed to help them. It literally releases chemicals in our brains such as dopamine.

There are many activities that can promote our health during difficult times such as COVID-19, including hobbies, physical exercise, and socializing (within government guidelines). These are all positive intentional activities that promote wellbeing. But it’s when we direct these toward others that we get the greatest gain. Equally, we need to be good at receiving help. Many of us are good at offering help, but not good at accepting help from others. It’s important we learn to do this – even asking for the occasional favour. It builds connection, it’s a win-win.

Jesus said, “it is more blessed to give than to receive” (Acts 20). Sometimes we narrow this down to some kind of brownie points in the sky when you die (excuse my crudeness). Certainly, there is truth in the idea of the “good and faithful servant” living well, but there is a much more immediate and impactful application of this verse which we often miss. Namely, it feels better to give, and it’s good for you – right now! So let’s push ourselves to keep being generous with our time, money and words, especially during these difficult months to come.

If you enjoyed this try reading When we return to normality, what will it look like?
This article was written for Premier Christianity

Great read as always mate.…
But…
I think what everyone seems to need at the moment is some spiritual guidance and hope.
Everyone is anxious for their families, themselves, their livelihoods, and for the future.
They don’t know how to act and they’re angry.
Not seen anything of note from any of the Christian websites I follow addressing these issues.…
We need hope and some rationale for all the s*** that’s happening…
We need guidance, the religious leaders need to step up!
Just a thought

Thanks Mart
I saw this recently:
https://www.theguardian.com/world/2020/oct/18/churches-tally-up-their-value-to-society-at-124bn?
Which i think PARTLY answers your challenging question.

I think spiritual guidance, hope, and joy are probably at an all time low — so yes I agree churches need to rise to this esp as we enter a long, dark and probably depressing winter.

Do you have specific ideas ?

Thank you Chris well rounded and helpful ..helping others is a good antidote for self obsession