Who wants to live forever?

Death is a topic that eventually we are all interested in. I was reading a summary of the many celebrities who have so far died this year, including David Bowie, Prince, Terry Wogan, Ronnie Corbett, Victoria Wood and Harper Lee, and something came to mind.

It was a TIME magazine article Can Google Solve Death? from 2013. It was a piece on Silicon Valley research into ways of avoiding aging and focused on Google’s latest venture. But since then other start-ups have gone further and there is now commercial research into ways of “avoiding” death. I don’t mean looking for new cures, I mean avoiding death. 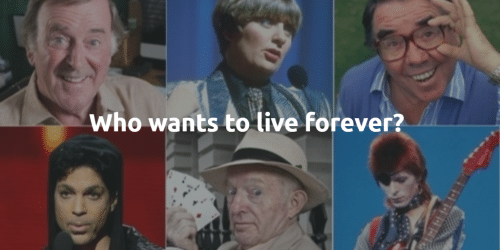 You might be familiar with the recent rise of the “bots” (short for robots). The simple example of a bot is the voice activated “chatbot” on your smartphone. Shouting “OK Google …” or “hey Siri …” into your phone and asking for restaurant recommendations, driving directions, or even a point of view on current political affairs, can result in surprising and (sometimes!) useful information. (Although as Microsoft proved it can all go pear shaped). And it’s not just about chatting realistically. Recently we heard news of the Google Robot that beat the world champion at GO – a game which I am informed is thousands of times more complex than chess, but none of us have heard of.

So take this fledgling conversational ability plus levels of computation that go beyond anything we imagine and enter … ETERNIME – Eternime will enable you to “live forever”. 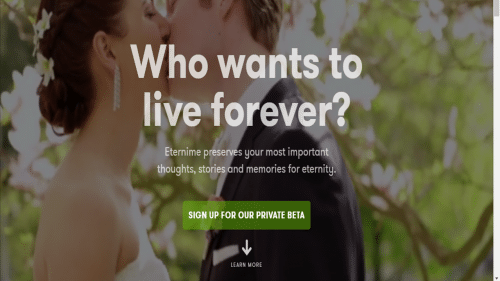 Simply put ETERNIME assumes that as a human you are basically a collection of memories, mannerisms and physical characteristics. ETERNIME gathers all of these and presents them as “you”. ETERNIME collects and stores all of your important memories, stories and ideas. Much of this can be collected automatically from Facebook, Twitter, Instagram, e‑mail, photos, videos, location information and even fitness trackers. Bots are also becoming capable of learning mannerisms, “ways of speaking”, and repeating sound patterns to sound like you.

While you are still (biologically) alive you then manage this information and decide what stuff to share post-mortem as well as training your look-alike 3‑D avatar until eventually it can mimic not only what you did say, but what you might say….. let’s call it your “personality”. Ultimately your 3‑D avatar is there for your loved ones to talk with after you have gone — a bit like a distant Skype call with a friend. Indeed the company’s motto is “it’s like a Skype chat from the past”. Behind your avatar is colossal computing power, massive cloud storage and … apparently you.

ETERNIME is not alone – there are several “life-logging companies”, but ETERNIME goes further. It doesn’t just store your information, it learns about you and then re-presents, as you.

We should also briefly mention the now old-school idea of having your body frozen immediately after death so that when there is a cure for the thing that killed you (even old-age) you can be brought back to life. See for example Alcor or Cryonics UK. It’s a bit expensive but don’t worry for UK£ 40,000 you can be decapitated after death and just have your head frozen — in which case on being revived they better have some good pain-killers. People will pay up to out-manoeuvre death. 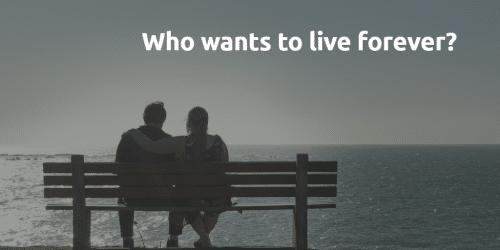 (Aside: I Don’t Want to Die Either)

As a minister, death is one of several currencies we learn to deal in, but the process of assisting people who are dying or grieving is always difficult and draining.  “I don’t want to die” is a hard question to answer. I mean it’s not really a question but if someone says it you are supposed to say something back. These words are more or less what my mother said in the late stages of cancer. Still mentally alert, still strong in her faith but still a natural thing for anyone to say — and hard for me to reply, since I had already said everything I could think of.

Besides being creepy, I actually think both ETERNIME and cryogenics attempt to deny us one of the things that makes us human: that we do have a limited number of years. Some might say that ETERNIME provides companionship, say like keeping someone’s ashes, but I wonder what happens to our grieving process if we somehow continue to interact with the information and image of a deceased person. I don’t know.

Anyway I promised 3 ways so here’s one more.

The Christian hope is not actually about “being hopeful” at ll.Its not about hoping that one day a cure can be found for whatever killed us, nor even a hope that people will take comfort in a 3‑D avatar of us when we’re gone. Its not based on the hope that something might happen. Its based on the fact that something has already happened. Something that God has already accomplished. You can have a replacement immortality or you can seek the real thing. You choose. 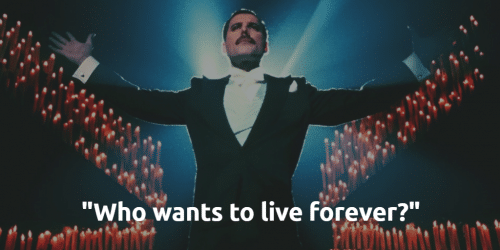 “Brothers and sisters, we do not want you to be uninformed about those who sleep in death, so that you do not grieve like the rest of mankind, who have no hope”. 1 Thessalonians 4.

Christianity.org.uk provides a summary of Christian beliefs
This blog is part of a series on technology and faith — Technology Gives and Takes Away. Try reading How your smartphone is changing you

Powers principalities … and the internet - 7 Minutes
#979

[…] about astonishing advances in disease-prevention, education, food production you name it. Hey it even offers the prospect of eternal life. And underlying all these technologies, is the […]

Thanks for this Chris. There appears to be a great paradox at the moment where people are yearning to stay young, deny the aging process and attempt to cheat death while at the same time there is much talk about ‘being real’ or’true to oneself’ , even ‘finding the true inner you’. As you’ve highlighted, the former isn’t ‘real’ it’s creating an image we want to convey and it denies the ‘real’. Many of the people I minister to are struggling because they believe that no one wants to know the real them and thy have lived with the stress… Read more »

Thanks — it seems that people who think they can pay to avoid death will look for ways to do so while the rest live in fear of people finding out “what we’re really like”. The internet, social media, Facebook etc are great ways of portraying an image of how we want people to see us. — as well as ETERNI.ME of course