3 lessons from a mum who tried to change the world

3 lessons from a mum who tried to change the world

It is not often that the mood of our country is transformed in an instant and. But the tragic death of Jo Cox MP did exactly that.

Until last Thursday most of us were unfamiliar with the diminutive, 5‑foot tall mum from Yorkshire, Jo Cox. But we know about her now. We know of her working-class roots, her warm Yorkshire accent, we know she was the first in her family to get to University, and we know that she tried to change the world … and it was changing.

Jo Cox combined a powerful intellect with an unstoppable spirit. She seemed equally at home in Batley and Spen Yorkshire as she was in Gaza, Sudan, Afghanistan, Syria or any of the other damaged parts of our world which she visited. The list of charities she worked for is lengthy. She even re-directed her MP’s pay-rise to increase her charitable giving. Members of Syria Solidarity UK — to which she was deeply committed — have said “humanity has lost a champion”.

But even though she isn’t with us, she can still remind us.

First we are reminded of Jo’s love for oppressed people. I choose the word “love” deliberately. Love in the Bible is not a feeling, it’s an active verb – it’s about selfless acts, it’s about doing the best for others whether we “like” them or not, (although I have found, if I make myself do good for someone I don’t like, I often end up liking them as well … very annoying the way God does that!). A question that sometimes comes up is “what’s the opposite of love?” Answers include hate, fear, maybe others. I don’t disagree, but most often the opposite of love is simpler than that. It’s indifference. We are sadly becoming indifferent, de-sensitized, and immunised to causes such as the plight of Syrian refugees. We see those boats so many times now, we distance it as something far away. We care, but not enough to do more, to speak more, to give more. Jo Cox, this non-Christian loving woman was not immunised. Let’s pray that her kind of love is contagious.

Second Jo Cox reminds us that there is inherent good in the world regardless of background, race or religion.

Our Christian worldview goes something like this …. On the surface people put on an appearance of decency, politeness and virtue, but beneath that we are all inherently sinful, often selfish, choosing to hurt one another…. I believe that, and yet beneath that we are all created in God’s image. The image of God within us doesn’t easily rub off. It can be tarnished and we can do things to smother it, but its still there if we look hard enough. Our job as Christians is to find this image often in unlikely places (including ourselves) and “render it” back to God. Some Pharisees once brought Jesus a coin with Caesar’s head stamped on it and asked if it was right to pay taxes to Rome. Jesus told them that if Caesar’s image is stamped on it give it to Caesar. But God’s image is stamped in you – give that to God.

We all know people who are not Christians, not even religious, who nevertheless consistently perform generous acts. God’s image is retained and is the reason there is inherent goodness.

And lastly Jo reminds us to care for our Members of Parliament while they are still with us. They deserve our respect and we should avoid maligning and scapegoating them. The crescendo of EU claim and counter-claim which paused for a time on Jo’s death is not because our MPs are liars. It’s because they actually don’t know what will happen if we leave or stay in the EU, but they are pushed hard to provide answers by each other, by the media, and sometimes by us.

Yes there have been scandalous incidents in recent years involving our MPs — especially involving expenses. But I know people in my own industry who have consistently over-claimed expenses as well –they however are not in the public eye.

If we are not careful we can egg each other on in a descending spiral of scorn on as we deride our Members of Parliament. Let’s remember that by far the majority of our MPs are in public service for all the right reasons. They are well-meaning, invariably hard-working, and sometimes mistaken needing gentle correction. A bit like you and me. 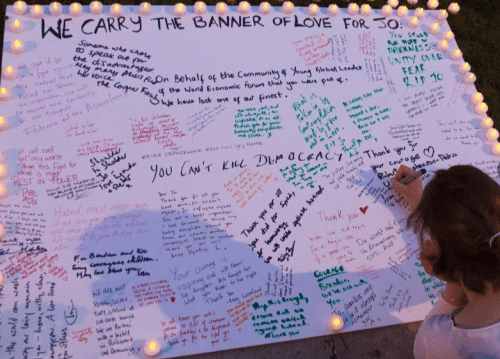 That is a powerful tribute to a remarkable woman Chris. Tragic that it took her death for us to know more about her and alas her contribution and passion are currently submerged with all the fallout from the Brexit vote.
Although so much does not make sense we trust Christ is still on His throne and she is not forgotten.

Yes its amazing how quickly we forge and move on

Hello Chris, as touching your third and last point, I draw your attention to the following verse:
“Thou shalt not revile the gods, nor curse the ruler of thypeople.” Exodus 22:28 KJV

Thank you Paul — yes — sorry for my slowness to catch on!

There is a comment thread on this article on the Premier Christianity site: http://www.premierchristianity.com/Blog/3‑lessons-we-should-learn-from-the-life-of-Jo-Cox-MP