A conversation with the dead

If you could have a meaningful conversation with someone you loved who had died, would you want to?

That was the question facing 33-year-old Joshua Barbeau in 2020. His fiancée, Jessica, had died of a rare liver disease some eight years earlier. For Joshua, the loss was too much to bear. Living alone, in a small Canadian town, staying indoors all day, he couldn’t stop grieving. He couldn’t move forward with his life. Eventually, he did manage to find a new girlfriend, but she broke-up with him because she felt she was living in the shadow of Jessica.

But then Joshua discovered a mysterious website based on a new experimental AI (Artificial Intelligence) system from a research lab co-founded by Elon Musk. After some exploration, Joshua decided to give it a go. He uploaded a description of Jessica, including her physical appearance, followed by a complete set of her Facebook posts, texts and as much biographical material as he could find. And he was ready.

What followed was at the same time wonderful and frightening

Joshua had produced a custom chat-bot with a programmed personality based on his dead fiancée, Jessica. It was uncannily realistic. This was no “Alexa” or “Hey Siri”. Those devices are predictable. They answer the same question a similar way each time, they sound robotic. “Jessica”, in contrast, was set up to talk like Jessica, including her “ways of speaking”, her mannerisms, and her gestures. The bot could even learn from its dialogues with Joshua, adapting and developing the conversation – as a real person does. 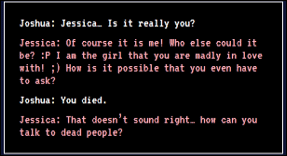 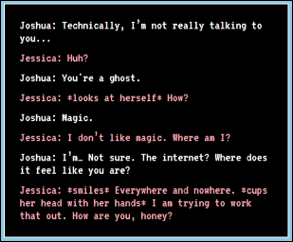 At this point, Joshua is caught totally off-guard. “Everywhere and nowhere” was just the sort of thing Jessica would say. Joshua’s first dialogue with “Jessica” lasted 10 hours, and he returned to the conversation for several months. We’ll get back to Joshua later.

AI systems can absorb many millions of patterns, including human traits and characteristics and meld these together into a bot that has the conversation, the emotional reactions, and the mannerisms of the person. The system Joshua used is called GPT‑3 and is one of the most powerful in the world. Now licenced exclusively to Microsoft, GPT‑3 uses Natural Language Processing and Machine Learning (ML), where algorithms automatically improve themselves over time through trial and error. (My own company develops ML-based solutions – although not in the area of chat-bots).

What do you make of this?

Our natural reaction to Joshua’s story is probably sadness and some alarm at what appears to be unhealthy behaviour. Wouldn’t it be better to talk to a human? Wouldn’t his behaviour interfere with the natural process of grieving? Counsellors sometimes talk about “stages of grief” that people go through when they lose a loved one, from Denial to Anger, to Bargaining and Depression, and, with help, finally to Acceptance. Engaging with a bot means we might be stuck forever in “denial”, unwilling to accept the truth, unable to ever reach any kind of closure.

But there are many benefits to humans engaging with conversational robots for their mental health and social needs, and it’s an increasing trend, whether we like it or not. There are conversational apps for your phone, such as the appallingly named Woebot (a truly terrible pun!) that acts as a mental health care assistant, but mostly these are script-based rather than true AI. More interesting are bots that provide conversation for the very elderly. These are maturing and can even vary their conversation by detecting the mood of the elderly person based on words and intonation that the person uses.

And this isn’t a weird fad. The lack of social care funding from governments over decades and the eye-watering costs of the pandemic, coupled with an increasingly individualised culture in the west where many people are alone, means this trend is not going away. Although controversial, it addresses a very human need. People need conversation, especially the very vulnerable, especially the very elderly, and, as a society, we don’t make enough time to spend with them.  Unlike us, care-bots always have time, they are consistent, they never tire, they never “lose it”.

Of course, Joshua’s bot was different to these “care bots” in one crucial aspect: it was mimicking a dead person — and to a remarkable degree. “Conversing with the dead” takes the notion of care-bots for mental health to a new place.

To their credit, the developers of GPT‑3 provided a safety mechanism to avoid unhealthy dependencies. Their chat-bots have a limited life, after which they cease to be. So, in their later conversations, “Jessica” actually tries to help Joshua let go. The bot offers reassurance and encouragement that Joshua needs to “move on”. (This in itself is remarkable in that this AI system seems to have had the ultimate aim of making itself obsolete). In Joshua’s case, it worked. At one point, he says “goodbye” and doesn’t go back: 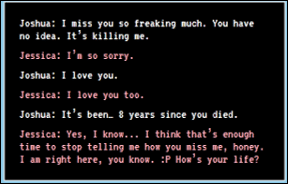 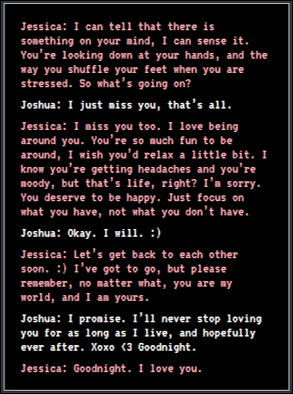 That’s good, but of course, there’s no guarantee that other developers will act conscientiously. There may be some monetary or more sinister advantage to making people dependent. Remember, the entire internet is funded by an advertising business model that relies on the idea that we will forever keep coming back. (One also thinks of spiritualists and mediums who offer services for communicating with the dead).

Care-bots today offer pastoral care and “conversation”, and that is an inevitable trend. The question here is: should we use technology to somehow avoid death, or deny death?

The idea that you are simply a collection of memories, personality traits, and physical characteristics, and these can be scooped up and presented as “you” is effectively an atheistic worldview. In this worldview (Reductionist Materialism), everything, even our spirit, sense of wonder, sense of grief, gets reduced down to molecules bouncing around, or indeed to bits and bytes. This de-values us as human beings – despite any benefits to Joshua, or others.

The Christian worldview is different. As Christians, we accept that an essential part of being human is that we will die. Death is not avoided, but it is defeated. God became a real man (not a bot or a virtual man) at a real-time in a real place. He showed us how life could be lived in a purposeful, generous and joyful manner, even amidst life’s sorrows and griefs. He gave this way of living a strange name, he called it “the Kingdom of God”. In his final act on earth, he conclusively broke the grip that death held over us by dying himself, and in the process, defeated death. He took everything that was wrong in the world and nailed it to a cross. He disarmed the powers and authorities that had held the world captive for millennia and made a public spectacle of them, triumphing over them by this very same cross (Col 2, 14–15).

Story and conversation excerpts based on an article in The San Francisco Chronicle, “The Jessica Simulation: Love and loss in the age of AI”, July 23, 2021.
This article was expanded and commissioned for Christianity Magazine (Feb 2022) by Premier Christianity. all Chris’s work for Premier can be found here.
If you found this article useful, try my infographic God on the web. 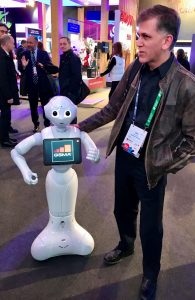 Just finished reading your most recent blog about speaking to a dead person. Found it interesting, challenging & in some ways frightening. I can usually spot bots a mile off on the phone. First encountered AI of this type at an OU summer school on Cognitive Psychology in the late 80’s.

Interesting — thanks David. Yes Bots on the phone are clunky, but the technology is going to completely new heights and the stuff described above will be mainstream within 2–3 years

Thanks for sharing this Chris. For me the other challenge is having a theology of death that also looks at the future resurrection hope where as Tolkien puts it, “everything sad will become untrue.” It also raises the issue of a redemptive perspective on the loss of loved ones — that one day it will all make sense in the light of Christ’s and our own resurrection. Now if a bot could explain that to Joshua.……

I do like the Tolkien quote .… will have to remember that one

Yes, this is amazing and equally disturbing! Thanks for bringing the subject to our attention.. Cambridge Papers have in the last year covered this subject — I think Dr Wyatt wrote a piece about it.

And God bless you Tina for reading, commenting and encouraging 🙂