40 days and 40 nights — the Biblical roots of quarantine

On an ordinary day in 1347 a lone ship came into dock at the port of Ragusa (modern-day Dubrovnik). No doubt friendly jibes were exchanged between the crew and the workers on the dock as the ship’s cargo unloaded. And no doubt everyone eventually got back to work. After all it was a busy place. Everything seemed normal, the world was well.

Except it was not an ordinary day.

Unbeknown to all on that ship, and several other ships that followed into the nearby ports of Venice and Milan, they were carrying rats. Nothing unusual about that, but these rats had fleas bringing the Black Death — also known as the Plague – already rampant in countries to the east. Within a few weeks it had spread around the port areas of Italy, and slowly but surely the Plague began its slow march across western Europe.

The first ever quarantine

Looking at the map below, it is interesting that, in those days of slow travel and no travel, it took around seven years for the Plague to cover the landmass of Europe beginning in Central Asia. Today in 2020 we covered the same ground with COVID-19 in weeks, such is our ease of travel and our frenetic pace of life. 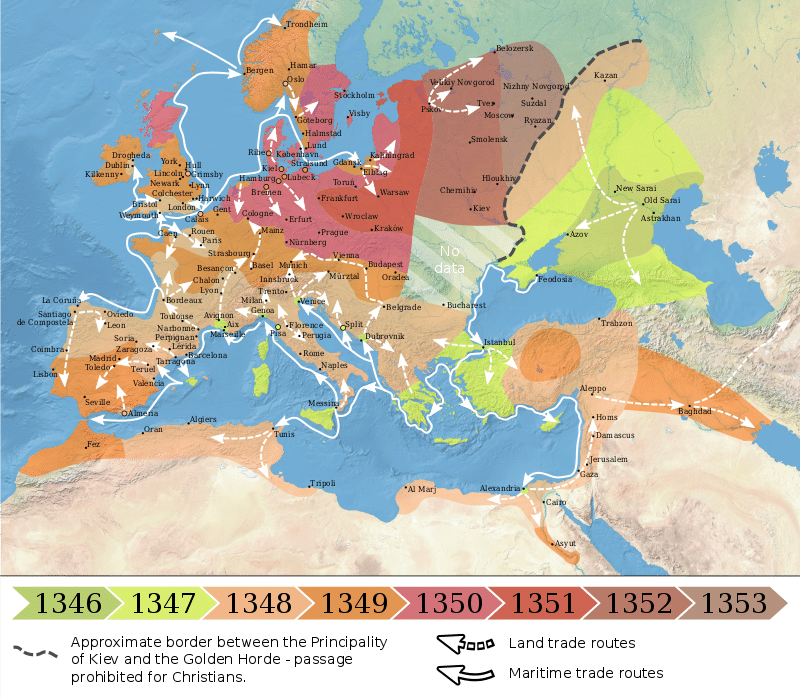 The progress of the plague in the 14th century (Wikipedia)

We can count ourselves fortunate that in the 2020’s, whatever else we have to put up with, it will not be the mortality rates of the fourteenth century. The Plague wiped out hundreds of millions of people, up to 60% of the population of Europe. Thank God, not us. But how was the Plague resisted? With little idea of medical technology or drugs, Ragusa did something radical and innovative.  They created an idea which would eventually be called “quarantine”. Ships coming into port at Ragusa were made to anchor off coast in a holding area for a lengthy period of days.

Ragusa was not the first city to be overcome by the Plague but, in 1377, it was the first to pass official quarantine legislation. By ordering apparently healthy sailors and traders to isolate for a period of 30 days (later extended to 40 days), the town officials showed a remarkable understanding of incubation. People arriving with no symptoms at all were held for the quarantine period  to determine if they were disease-free.

The word quarantine comes from the Latin quadraginta and the Italian quaranta, both meaning “40 days”. 40 days was chosen because of its strong biblical roots..The number 40 occurs many times and in lots of contexts, but although every case is different, most of the Biblical periods of “40” relate to the single idea of waiting, and testing: 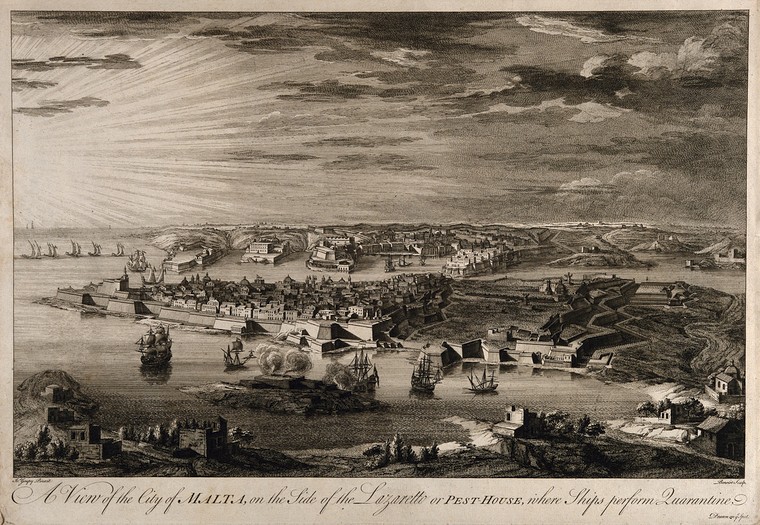 We are all in “quarantine”

We are all in a state of waiting and testing. Economically, psychologically, mentally, physically, and spiritually we are waiting, and it feels like a trial. The novelty of clapping for our emergency workers is a fading memory, and the air of discovery of those early online meetings has turned into a kind of Zoom fatigue. To be sure, some people enjoy the enforced quietness, the ability to cycle on calm roads, and the welcome break for our climate – and these are important. But most of us miss something of our old life.

Initially the experts talked about a “V” shaped recovery period, which was then adjusted to a “U” shape ie with a longer time down at the bottom. Recently I read an economist’s article talking about a “W” shaped recovery. I don’t know who’s right but to me this wait is starting to feel like a whole line of “W’s” end to end.

As we wait in this quarantine of U’s, V’s and W’s, what can we learn from the quadraginta, quarantine, Biblical periods of waiting?

The 40 years of wandering in the desert for ancient Israel, although punishment for their inconsistency and lack of trust, nevertheless showed them that God really was dependable. He met with them, He showed them the way, and He sustained them with “bread from heaven” — daily.

But it was one day at a time, each day lived with little knowledge of what would happen the next day, except for God’s promise. Living each day, for that day, is something I’ve never thought about, but I am starting to think about it now – maybe you too. What can you see that is good, just today?

And in the New Testament, Jesus fasted for 40 days. He was left physically weak and susceptible, and yet, somehow, it brought him closer to God. His waiting in the wilderness connected him with God in ways that ultimately strengthened him, enabling him to face great trials, (it’s where we get the Christian idea of Lent from).

This is a hard one to accept, but sometimes God needs our weakness in order to connect to us. Even Paul eventually discovered this: it was precisely when he felt weak that God’s presence in him reached its peak: ‘My grace is sufficient for you, for my power is made perfect in weakness.’, 2 Corinthians 12.

Waiting, feeling weak, with little idea of the future isn’t something we would choose, but good can come of it.

Lots of people tell me we are living in historic times. I’m told people will write about these times for ages to come. Most of us however, including me, have decided we don’t like living in historic times, we quite liked the ordinary times when you could …. well, go out and meet people. That’s also something to think about in our “quarantine”: When all of this comes to an end, and it will, we must celebrate an ordinary day. 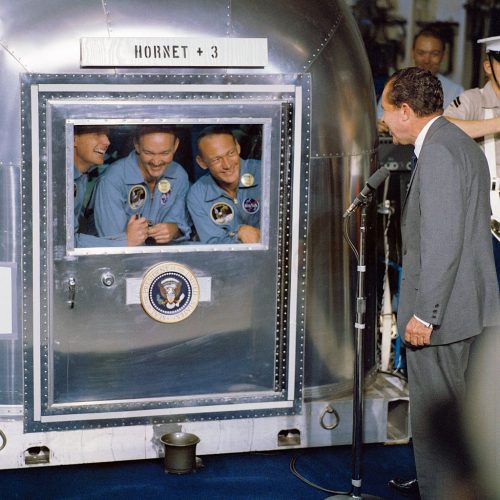 Apollo 11 astronauts quarantined on arriving back from the Moon — just in case!

Looking for something else? …  Did you know these 10 everyday phrases are from the Bible?

This article was first published by Premier Christianity

Oh wow! Thank you for this article. It struck a significant chord with me. It is an appropriate timing, I’m certain having been led here by the Lord, and I thank you for it.

query: if there is such resounding biblical significance to the “40 days” of quarantine, why did it begin as thirty days?

Great question Emma — dont know. I guess the Biblically literate town officials were not asked for their opinion until later 🙂 … or maybe they just realised that 30 days didn’t seem quite enough and the Biblical 40 might work better

Hi Chris Im.embracing the challenges and doing ok thanks. Hope you are too.
Love fhe article thanks.I will.share it witb our church wnatsapp group

Again a brilliant article Chris
Thanks so much , very interesting