Faith and forgiveness in the face of unimaginable horror

In June 2020 indoor socialising in the UK was banned, so to celebrate her birthday, Bibaa Henry invited her sister Nicole Smallman along with friends to a local London park. Guests brought with them food, drink, fairy lights and blankets. It was a fine evening, the group shared food and friendly banter. As darkness began to fall, the friends said their goodbyes leaving the two sisters alone, enjoying each other’s’ company.

The next day the bodies of the two sisters were discovered by friends. They had been stabbed repeatedly and dragged out of view.

Within a few weeks, an 18-year-old man was arrested and later convicted of murder. He had made a warped “pact with a demon”, signed in his blood. He had pledged to murder six women every six months in return for winning the lottery.

Anyone can become a victim of appalling crime, just by being in the wrong place at the wrong moment – although thankfully murder is incredibly rare. But what followed was not down to bad luck. Firstly, the family and friends were forced to search the park themselves as the police did not wish to send anyone. But the soul-destroying blow came days later, when two police officers breached the taped-off area and took sickening selfies of themselves with the two corpses. They shared these on WhatsApp with 40 other officers, referring to the two sisters as “dead birds”. Astonishingly this happened after family members were themselves denied access to the bodies.

As the presenter of this 1‑hour documentary says, “how many times can one family be let down?”.

The documentary is a sensitive insight into a horrendous tragedy and focuses on the dignified reflections of the two parents, Mina and Chris. Mina, a retired Anglican priest and the first person of colour to become an Archdeacon, speaks of her experiences of grief, offering forgiveness, and experiencing grace; grace she has already found, and grace for which she still waits.

This is a harrowing story of the profound nature of evil in its most brutal form, and on several fronts.

The murder itself was committed by a young man who (we have heard this before) had been referred to the Government’s counter-extreme programme, Prevent, but discharged after a year. He was eventually sentenced to a minimum of 35 years in prison, and only escaped a “whole life term” because of his young age.

Then consider the initial police response: two women, completely out of character, go missing, but their mother is initially refused police assistance to help find them, so friends and family are left to find the bodies themselves. Mina believes that her calls to the police were not acted on immediately because it involved two women of colour.

Lastly, what was going through the heads of the two police officers as they brazenly took selfies with Mina’s two daughters? One of the officers has daughters himself. As Mina states: “… to find out that he has two teenage daughters. How can you separate yourself as a parent and do that to someone else?”. The officer even sent the images to a younger officer he was mentoring. Mina again: “What does that say? It says: ‘I’m baptising you in the toxicity of our organisation’. Something has gone wrong with vetting, monitoring and accountability”.

The two officers apologised unreservedly at their trial for taking and sharing the images. They were discharged from the police force, and both eventually jailed at the Old Bailey for 33 months. 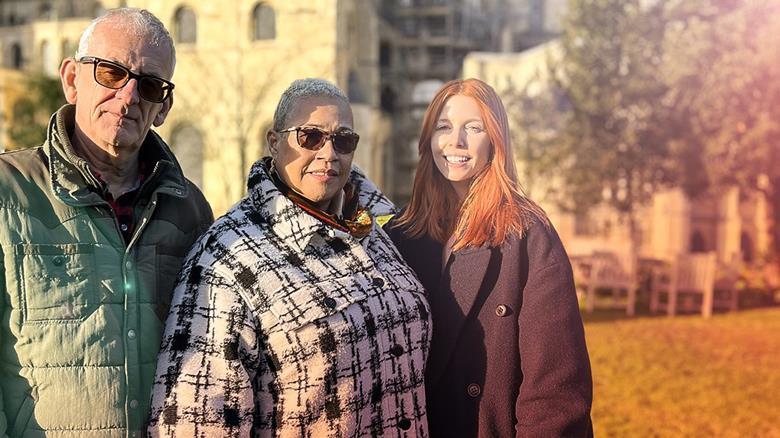 What can faith offer in unimaginable sorrow?

A horrific double murder in a family is traumatising, but to be followed by gross incompetence and callous disrespect by those we trust, is profoundly shocking.

And there are no answers that faith can give. Mina says: “for two out of three of your children to be murdered on the same night is just incomprehensible. As a priest I have walked alongside people who have lost those they have loved – and I haven’t had the answers”. At her lowest points she has contemplated ending her own life in order to be with her two daughters: “I want to join my girls”, she says, “but I could never do that to Chris and Monique”, (her husband and one remaining daughter). Mina’s grieving response is understandable, and totally honest.

But Mina goes on: “there are priests who have lost children and walked away from faith. It’s not a testament to how strong your faith is, it’s about being able to hear beyond the evil of this world, about being able to dig deep when the bad times come”. She has been pushed to the edge of her trust in God and beyond, but finding God in the darkness has been her lifeline. Through her faith, she has somehow found a way to live alongside the traumatic events of the past two years. The documentary portrays how her relationship with God has even strengthened her resolve to fight violence against all women.

“For me it’s about God’s grace; you can’t purchase it, you have no control over it. When it’s given, you know,” she says. She has now, astonishingly, found grace to forgive her daughters’ murderer. But for the two police officers the journey to forgiveness is not complete, and may never be complete, and that’s OK. “I’m still waiting. I haven’t received the grace on them yet”, she says.

I actually remember hearing news of this case whilst watching News at 10. But it wasn’t the murders that made the news, it was the actions of the police officers taking selfies. And I recall sitting there thinking, “why have I not heard of these murders before?”. The answer is that they were not considered newsworthy enough to be given headline status. There was no national outcry.

Mina feels very strongly that race played a part both in the initial police response and the lack of media interest. She says: “Where was the outcry for two black girls? I didn’t get the interviews, there was no air time, it wasn’t front page”.

But the lack of media interest may also be a reflection on all of us because our media feeds us with “what we want”. Just like Google, just like the internet, our media is expert at following public interest. So why wasn’t the murder of two women of colour front-page news? Maybe we can’t answer that, but we can at least take an hour to watch Mina’s story.

You will likely shed tears, and that’s the right response.

Two Daughters can be viewed on the BBC iPlayer now

This review was written for Premier Christianity — all of Chris; work for Premier can be seen here