Would you pay off someone else’s mortgage … assuming that person was not family … and you didn’t owe them a penny?

Growing up as teenagers, my mother was left to bring up my brother and I on her own. We didn’t know she was running into debt and was struggling to pay the mortgage from her meagre pay as a receptionist, or that she was pawning her jewellery to pay our bills. But that was happening and it was getting worse each month. My mother was not religious, but in despair she found herself wandering into a church one lunchtime in tears. The minister had no idea who she was but prayed with her. A few days later her boss, a friendly female doctor, asked her what was wrong and it all came out, again with many tears.

That kindly doctor paid off our mortgage … completely. I don’t know why.

Was it a miracle?  Outrageous, inexplicable generosity precisely when it was needed. If you asked my mother she would say it was a miracle, and it brought her to faith.

But many would say that this was an exceptional event but it was not a “miracle”. To be a miracle, an event must be “impossible” or un-natural, something contradicting known scientific laws (… not simply contradicting human nature!) 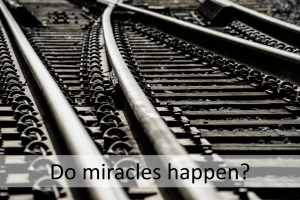 “The Bible is packed with miracles” … not really

We are accustomed to reading about impossible, unnatural miraculous events in the Bible. Jesus of course performed many miracles. And maybe that’s why as Christians we tend to think that miracles occur throughout the Bible. We imagine the Bible has a miracle on every other page, but that’s not true.

If we discount God simply speaking to his people, then there are large swathes of the Bible where miracles do not occur. Indeed, sometimes the Bible tells us the miracles had dried up. See for example Gideon’s immediate response to the angel: “… where are all the wonders that our ancestors told us about?”, (Judges 6). Later, 1 Samuel even says: “in those days the word of the Lord was rare; there were not many visions” (1 Samuel 3). There were long periods when people did not see signs, wonders or visions.

Indeed, most Biblical miracles occur only through Moses, Elijah and Elisha in the Old Testament, and Jesus and the Apostles (Acts) in the New Testament. Some writers suggest that God used miracles to inaugurate, or authenticate a new thing. So, miracles increase at the start of Moses and the Exodus, Elijah and the prophetic age, and Jesus and the apostolic age. Eg in Acts 2.22 Peter says to the gathered crowds at Pentecost: “Jesus of Nazareth was a man accredited by God to you by miracles, wonders and signs”.

But even though miraculous events, don’t occur throughout the Bible, there are many seemingly impossible miracles in the Bible. 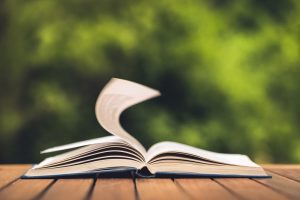 How do they work?

“Miracles break the laws of nature” … not always

In a recent edition of the podcast Unbelievable the Cambridge scientist Sir Colin Humphreys explains how several of the miraculous events in scripture have a basis in science. The parting of a huge body of water, the Red Sea, in Exodus 14 can be explained by something called Wind Set Down.. And the day “the sun stood still” in Joshua 10, is better translated as “the sun was silent”. Humphreys has calculated the date of a total eclipse, effectively “silencing” the sun, at around the time of the events of Joshua 10, and he suggests this is what happened.

But “this IS a miracle”, says Humphreys. “The miracle is not in the event itself, but in the precise timing of the event”. God caused this bizarre but natural event to happen exactly when and where it was needed. That’s the miracle.

And, it’s worth noting, there are other, recent advances in scientific understanding which might begin to explain the extraordinary and miraculous nature of God.

For example, quantum physicists tell us that a particle can be in two completely different places at the same time. How does that work? I don’t understand, but it does remind me of God’s omnipresence – the idea that He is present everywhere.

Or, for example, Einstein’s Theory of Relativity predicts that the faster an object goes the slower time goes. That’s weird enough, but the strangest part is that, at the speed of light, time stands still. So, if you are travelling along at the speed of light (and somehow survived) the hands on your watch literally stop. Again, this is mind blowing stuff but it indicates that some things (like light) may lie outside of time. So, is it that surprising that God himself is outside of time? (And see 1 John 1.5: “God is light”). 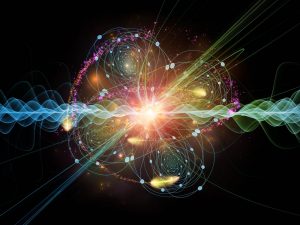 “But there are miracles that break the laws of nature” – yes, absolutely

There are miraculous events in scripture where God appears to step outside of his own ordained laws for a moment.

This would include many miracles, from Elijah’s jar of oil that never ran out, to many of the healings in the New Testament, and of course the greatest miracle in scripture — the Resurrection. The mechanism, the “how did God do that?”  shouldn’t surprise us or obsess us. God created the laws of nature in the first place, he is at liberty to change them for a moment, to insert a new event, “to do a new thing”.

And even if science develops to explain how some of these miracles occurred, it wouldn’t discount God’s presence, God’s timing.

Eyes to see and ears to hear

Yes, in the end, it comes down to faith. Anything can be explained away if you don’t want to believe: … “it’s just a coincidence … it never really happened … that doctor was just generous, and coincidentally straight after my mother prayed …”. The idea I have most often heard from non-believing friends could be re-phrased as:

That is a closed view. It is “a leap of faith” for non-believers to argue that just because things normally happen a certain way, they can only ever happen that way.

To be sure the subject of miracles is difficult. Not least because we sometimes ask why a miracle did not happen for one person when it seemed to happen for another? We often won’t know, but miracles remain at the heart of the Christian faith, most especially with the raising of Jesus on that first Easter morning.

Today, miracles do occur, whether it’s the opportune event just when its needed, God working within his laws of nature, or God working outside his laws of nature. Moreover, for those with eyes to see, there are miraculous happenings every day. The intricacy of a common daisy, how it comes to be. The colour of the sky of an evening. Why there should even be an astonishing colour like that? Or as C.S.Lewis said:

Miracles are a retelling in small letters of the very same story which is written across the whole world in letters too large for some of us to see.

Do you believe in miracles? Have you seen one? Let me know! 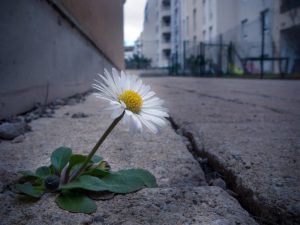 If you enjoyed this try Does God Still Speak Through Dreams?

Acknowledgements: Unbelievable is a weekly podcast that openly discusses different opinions between Christians and non-believers. The examples of God working through the laws of Physics (Quantum Physics and the speed of light were given to me by Sunil Raheja who writes on Inside Out Transformation.

It strikes me as somewhat amusing that we as modern people feel we can tell God what He can and cannot do! There is so much about life and the universe which should inspire and amaze us, leading to worship, but because it is so common place we take it for granted. We need to rediscover our awe and wonder about life itself. Amazing story about your mother! That someone should be moved to give in that way for such a tangible need is a miracle! I’ve also seen God provide in ways that were so personal I could only… Read more »

We had not dozens, not hundreds but literally thousands of people praying for a miracle for my wife. Entire congregations of churches, family, friends and more. My wife still died from cancer.

Hi Steve — apologies for the delay in response.
Really sorry to hear about your wife Steve — and what you must have gone through with so much prayer and hope. There is no answer as to why God sometimes acts and sometimes does not as I am sure you know. I did write something summarising the ideas we have on why disasters happen: https://7minutes.net/blog/why-does-god-allow-bad-things-to-happen/
BTW — what was your wife’s name? She was obviously very well known

Only seems like something bad happened if you view death as a negative. The world is a crummy place full of suffering. Passing on gets a bad reputation.

I understand where you’re coming from, this God may seem to work in natural and unnatural ways and it is up to us to have the faith to believe. However, something would only be proven to be effective if and only if it can be tested and prove to have a certain level of consistent reliability. Even so, if miracles are something we have stick our necks out and rely on this faith, I find it irrational to use it as a basis of quantifying whether or not it works. It’s hard to simply accept that God’s judgement is right, and… Read more »

Hi Bryan Thanks for reading and commenting. I dont think miracles “quantify” whether faith (God) is real or not. Reasons for faith come fro many other sources before we start talking about miracles.We could discuss that maybe. Then your point on “God’s judgement”. Again I am not saying at all that if events go one way or another that has to be God’s will. That might be the view of some Christians (Calvinists) but has never been mine and nor is it contained in this article. Your last point — I agree we need a forum for where people can question… Read more »

Really good – something to think about!

I enjoyed reading this Chris, thank you, loved the CSLewis quote!

Thanks for commenting Jude

Did that really happen about your mums mortgage mate?
Anyway BRILLIANT!
Thanks so much
Martin

Absolutely., 100%.
it was only when retelling that story recently in a ladies meeting one of them exclaimed ‘that’s a miracle!’ And I realised, belatedly, they were right.

Shame he can’t give food and water to those who need it though!

… and yet He has given you Neil the capacity to do just that .…

Your blog on miracles is really good. I also agree with you about God and time. Perhaps I would add that God is both outside time and within time. Someone once sent me a Christmas card with a picture of a chef holding a spherical Christmas pudding. Underneath were the words: “He holds the whole world in his hands.” The chef was outside and upholding the pudding he had created, but the creative genius of the chef was within each morsel of the pudding. So God is outside time, seeing the past, present and future all at once. But he… Read more »

Thanks Colin. Well that adds yet another dimension!
I shall definitely not look at Christmas puddings in the same way again ?
Wishing you well with your work – wonderful to have such great minds as yours in the kingdom.

Awesome Christian Blog. Keep up the good work! iBlogGospel too.