Joe Biden attends Mass every week and regularly speaks about his Catholic faith. But earlier this month the Catholic Bishops of North America voted by 3 to 1 to begin work on statutes that could ban him from receiving communion, because of his views on abortion. The Catholic Church considers abortion to be a grave sin. But Biden has a liberal stance that abortion, in some cases, is necessary.

For an openly Catholic President to openly oppose Catholic teaching is unprecedented, so the story has attracted a lot of press. 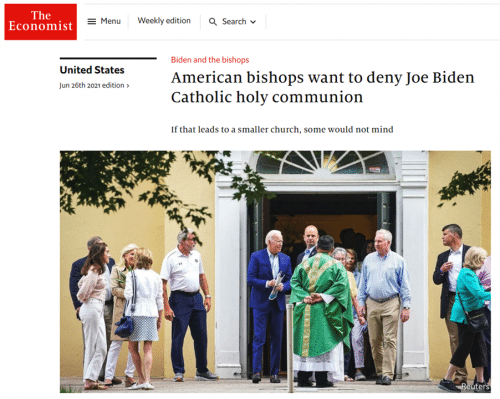 Important as it is, abortion is hardly the only issue that separates Christians. The list of divisive issues includes gay marriage, capital punishment, climate change and the old one that doesn’t go away… women in leadership. All these topics are huge and need their own space for discussion, but the thing they have in common is they are also political, high on the political agenda of society. This raises an important question:

Should the church involve itself in political issues of the day?

As a follower of Jesus, I have to answer a clear ‘yes’ to that question. Jesus often debated with governing authorities and attracted crowds at public events. He stood up against injustice and regularly gave speeches pointing to a new order. He would almost certainly have become involved in issues of this nature (although we don’t know what he would have said on legalised abortion).

The gospel is deeply connected to matters of social justice, and that makes the gospel “political”. Of course, that is different to being “party political”. We cannot claim Jesus for our Lib-Dem or Tory or Republican party (although some do!)

How do Christians maintain unity on issues that divide us?

We often get confused between “unity” and “agreement”.

We think that unity means we agree on everything, but it doesn’t. In an enduring marriage, we don’t pretend that we must agree on everything. We agree on some things (hopefully our wedding vows), but then we recognise that the relationship, our unity, matters more than any specific debate. We learn to “disagree well”.

Christian unity means we sign up to core gospel-centric beliefs. I suggest that these are only the beliefs and issues specially called out in the ancient creeds of the church. On every other matter, even life and death issues, we must disagree well, respectfully disagree, continuing to work together in love and in fellowship.

Everyone thinks ‘disagreeing well’ is a great idea, until its their favourite topic we have to disagree on

Keep the main thing the main thing – the core doctrines of faith called out in the creeds. Other matters may be supremely important, but they are not matters to split churches or refuse Communion to members.

Learning from our history

Through history, churches have cast-out individuals on all kinds of matters. Equally, churches have split and whole denominations birthed on topics which, looking back, sometimes don’t appear to be that important. The Eastern Orthodox and Catholic Church split in 1054 AD (ultimately their split was over over single word). The Protestant Church has divided and split countless times since the Reformation. In fact there are now over 40,000 Protestant denominations (yes, you read that number correctly).

We need to take seriously the command of Jesus for Christians to actively love one another. This is not an invitation, this is a command. We don’t have to agree with other Christians, or even like them, but God’s expectation is that we love them. His expectation is that we join with them in extending the love of God, and bringing the kingdom of God.

We don’t have to agree with other Christians, or even like them, but we do have to love them

And let’s take the trouble to understand the issue from the other side. Sometimes we react in ignorance because we only know what “Christians like me” think. This often includes common mistakes, for example: “Catholics worship saints” (no they don’t), or, “there’s no scriptural evidence for infant baptism”(yes there is).We need to take the trouble to understand why Christians have a different view to us, especially on emotive topics matters of political and social conscience such as abortion 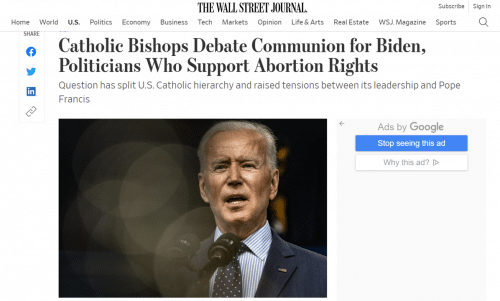 So, will Biden be the first US President to be denied Communion by his Church?

Clearly the Catholic church are now considering if Biden’s liberal view on abortion puts him so far outside of Catholic orthodoxy, that he should be denied Communion. It’s also complicated by the idea that the Pope can declare an issue to be critical or not.

If they did proceed with this idea, it would be a mistake for two reasons. Not only is this not a gospel-centric matter, but Biden isn’t simply the President of Catholics. He’s the President of 330 million Americans. He has a wider remit than the church, and he has the responsibility to represent a spectrum of views of the American public, not just outspoken clerics. 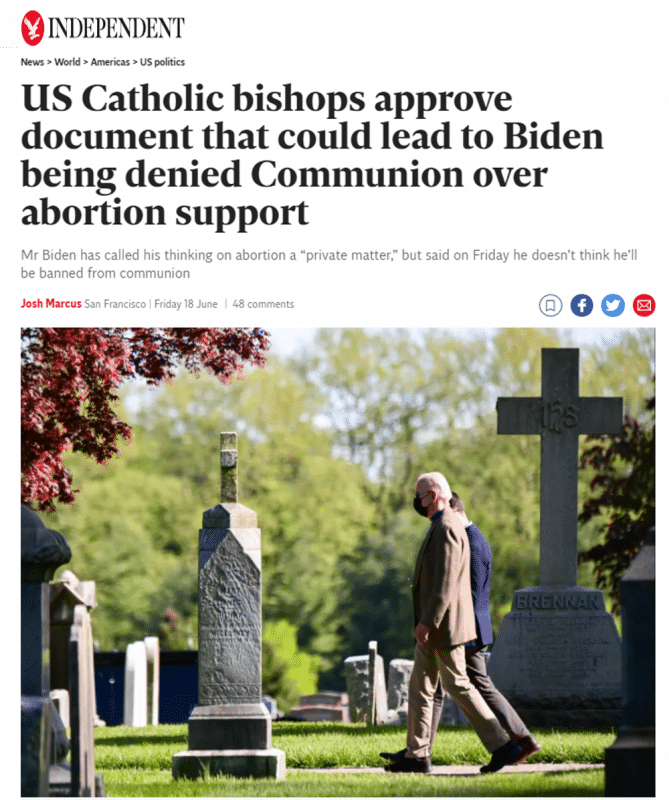 This article was written at the request of  Premier Christianity

For specific advice on how to deal with conflicts within a church try Why Do Christians Clash?

I think it would make sense. All in all, communion is about sharing, and the position of this gentleman (and others in his party) in an extremely serious issue is far away from the one shared by the Church.

Diego, when you say “it would make sense” — you mean it makes sense to deny Biden Communion?

Life is indeed precious, however Jesus said, let him without sin cast the first stone. No one should come between a man seeking communion or for that matter a women that has had or intending to have an abortion, from seeking God.

Thanks for reading and commenting Howard

Abortion should not be considered an issue that divides Christians. Abortion is a moral crime as it deliberately kills an innocent baby in the womb, and should never be condoned by authentic Christians. We have no right to decide who lives and who dies. “Before I formed you in the womb I knew you” Jerimiah 1:5

Let’s pray the American bishops will have the courage to forbid Biden from unworthily receiving Holy Communion, until God willing, he has a change of heart and revokes the liberal pro abortion regime he has facilitated.

Thanks for reading Paul. I agree with your first statement — that’s what the article is saying.
When you say “abortion is a moral crime” is that because it violates the sanctity of life (as others here are saying)? If so would you have the same view on Euthensais ie even in cases of extreme personal and terminal suffering it cam never be right to help someone to die? Just wondering — obviously, these are extreme and difficult topics.

Hello Chris, Interesting read here. I am not an American, so I may be very oblivious of the realities over there. But being Christian, we are one, somehow, all how :-), so let me speak as one.  About abortion, inasmuch as I want to show love and empathy to brethren and others, we don’t get to decide who lives or not and when. It is not our prerogative. We don’t premeditate who lives or doesn’t. Like Christina commented, a case where the pregnancy endangers the life of the mother is like a case where you see a person stand in front… Read more »

Hi Sally — Thanks for reading and also for your detailed comment. You make the point well that “if abortion is OK why not end lives after birth”. Would you have the same “sanctity of life argument” against say Euthensais? (I also asked Paul this). In other words: even in cases of extreme personal and terminal suffering, it is never right to help someone to die? Just wondering because the sanctity of life discussion is of great interest to me. On your last question: “what scriptural evidence is there for infant baptism”: I would say, as a very quick answer, there… Read more »

Hello Chris Long before Jesus was on earth, the old testament made plain the sanctity of life in the womb. My own position is that abortion is wrong in all cases except where the choice has to be between the life of the mother OR child — the mother often has other children. These are difficult times and we all as Christians have to make difficult decisions; one day we shall give answer as to why we made those decisions. I have dealt with young girls who have had abortions — their grief is undeniable especially when very young.  We must… Read more »

Thanks Christina — very helpful. I get your position (very similar to mine actually), but then haven’t you already opened the door on abortion? By saying “abortions can take place in this one instance .….”, I suggest that Biden would probably say “.… in these two or three instances”.
Completely agree with your last point — and I see you have personal experience — to love and support one another. That’s kind of what I am saying in this article.

With great respect, Chris, but I disagree profoundly with your final conclusion. There are a lot of murderers in the USA — does Biden have to actively approve and promote murder because he is their president?

Thanks Keith. Well I think you are taking my point and extrapolating it a little too far Of course I don’t suggest that Biden actively represent/approve of murder. I am saying that he has the difficult task of somehow representing people on both sides of an emotive and difficult debate, AND every other debate that’s not concerned with abortion. He is bound to upset groups of people in every case, and esp when Catholic church teaching on topics like abortion (or indeed contraception) clashes with civil law.